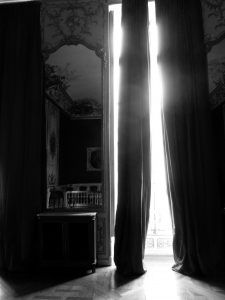 I kept rolling over and looking at the clock. Every hour or so I took another peek. It was far too early to get out of bed at 3:30 am. An hour later it was only 3:35 am, still too early. Three hours later it was 3:48 am and I had had enough.

Something or someone was bothering me and I figured finally that it was Brian Dodd again. Brian had told me that when he couldn’t sleep, he’d scramble out from under the covers and tip toe down to the basement. There, on what was a billiard table with a sheet of three-quarter inch thick plywood, on top; he would practice his calligraphy. This became his early morning routine. He didn’t stay up late to paint, he instead went to bed, slept for a few hours and arose while the world outside was black and silent. He went down to a place where he could focus on himself.

There was no one calling him on the telephone. No one would knock on his door. All was quiet on his little street. There were no cars driving past his home. Dogs were sleeping, not growling or barking.
The mice in his walls were slumbering. Brian was up.

He was up making magic for his soul.