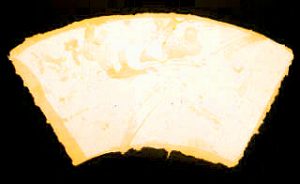 Here’s a category that was probably never even considered by the Guinness Book of Records; “Artworks hung face to the wall.” Thank you very much for allowing me to hold this distinction. The Museum of Modern Art, in New York organized an exhibition of works on handmade paper, in 1976. Kathy Markel called to tell me she was loaning a piece to of mine to the exhibition. I was too busy with the Venturi renovation and addition to the Allen Art Museum to go see the show until toward the end. A friend who often helped me in the studio, Walter Bosstick, was in New York about a month after the exhibition opened and reported back to me the following: “The piece they are showing is beautiful. It’s displayed in between a Jim Dine and a Robert Rauschenberg. But, you know, I thought I knew all your work and this one is very subtle.” I asked him to describe it, since I didn’t know which piece was selected. He did and I was really puzzled. It didn’t sound like my work! So, I asked how, other than by the label, he knew it was my work? “It has your signature right on it.”

I was on the phone to MoMA as fast as I could dial. I explained to the curator that I signed my work on the back. By the time I arrived in New York the piece was properly presented. It had even been purchased by an art critic. My question is: which side did she pay for?