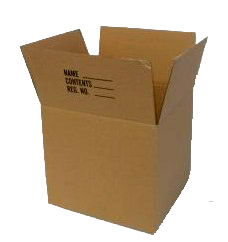 His latest one-man exhibition was held in the rather large storage room of the local Pottery Barn, and that was quite a few years ago. Refreshments were served during the opening. Lunchables and boxed wine were available at cost, in the alley, as the Pottery Barn had no liquor license.

Few knew who he was anymore, although he had shown widely at one time. His work was in museums, here and there, but was seldom on exhibit. It happens. It also happens that artists continue to work, whether or not they have recognition.

The drawings and collages he had created for the Pottery Barn storeroom show were produced directly upon the kraft cartons circling the room, floor to ceiling. All sides of the cardboard boxes, not only those facing the center of the room, had been decorated, marked, painted, or drawn upon. Perhaps the number of boxes was more than a hundred. No attempt was made to obscure the lettering: MADE IN CHINA. The cartons were not empty, but heavy. Inside these decorated cartons remained the articles, goods, and saleable wares. Black stenciled labels indicated the contents. I picked up several boxes and peeked at the drawings on their undersides.

The value of each artwork included the cost of the enclosed products, at retail price less ten percent. This exhibition did not conform to standard museum or gallery conventions. It further deviated by a complete lack of labels and not a single box was signed. Yet, it was obvious that every box was decorated by the same hand.

I purchased two of the decorated cartons. One box contained twenty-four coffee mugs, the other 144 pine-scented candles. I placed the artworks in the living room, the candles on top of the cups, next to the television. Why I chose to juxtapose them with the tv was partly due to available space, but also from a sense of irony.

On one hand I could watch two boxes that changed images when I got to my feet, walked over and physically turned them. On the other hand, I had a single box that constantly flickered, whether or not I touched the remote control.

They sat there for years, ignorant of each other. The kraft color of the boxes darkened slightly. At first, I turned them periodically so the other sides could be seen. After a while, I decided on my favorite sides, after which they remained in the same position.

One summer evening, during a powerful storm, an ancient oak tree was uprooted. As it crashed down it took with it the electrical lines. Sparks were flashing on the sidewalk, but the neighborhood was dark and silent. I searched the kitchen drawer for flashlight batteries, but found only matches. I picked them up, along with a knife. After all these years I had a use for pine-scented candles.

I felt my way around the room and sliced easily through the old tape on the box top. I extracted several wax candles, lit them, and placed them strategically to maximize illumination. The aroma of the melting wax was not what I had expected. It did not smell like pine, but more like bees wax and myrrh. The power outage continued into the heart of the night. When I returned to the box for more candles, I held one lit candle high so I could see if all the candles were the same golden color.

That is when I noticed the inside of the box. It was more brilliantly colored and decorated than the outside.

When the storm was over and the lights finally restored, I took a closer look. The interior of the carton was more beautifully painted than the exterior. I removed the candles and packing. All sides were resplendent. I set the candle box aside and carefully opened the box that contained the twenty-four coffee mugs. I emptied it completely. It was equally magical on the inside.

March 29, 2007
Post script- My daughter, Lauren, sent me this note:
“My bottle of iced tea has a simplistic but perhaps applicable quote on the inside of its cap: “If you hear a voice within you say ‘you cannot paint,’ then by all means paint, and that voice will be silenced” – Van Gogh. “

When all is said and done, it is what’s inside that counts. Silence the voice.