I am certain you have received countless requests over the years from artists hoping to make what they believe are clever variations upon your “Erased deKooning Drawing”.

I am writing with a simple proposal, which I call The Rauschenberg Repulp Project. Hopefully it is less clever and more appealing.

When you made “Erased deKooning Drawing”, I was six years old. By the time I learned, as a high school student, of the undrawn drawing both you and Wilhelm deKooning were my personal heros. At the time I wondered if you kept the erasures from the deKooning , but decided that was highly unlikely. Still, I imagined a glass jar filled with crumbled, dirty, erasure residue.

Last August I made an appointment with the curator at the San Francisco Museum of Modern Art and then drove 1400 miles from Colorado to finally see your legendary piece. I spent an hour alone with it. The museum now includes, in its archives for your piece, a visual poem I have since written; “Poem Not Dedicated To Robert Rauschenberg”.

In 1976 my work was exhibited in New York, at the Museum of Modern Art next to one of your poured pulp pieces. It was an exhibition of work on handmade paper. How my particular piece was displayed is of some interest and part of a larger story which I will abridge for you.

My print was exhibited face toward the wall, the printed side of the paper had been flipped by the framer so my signature was visible. I sign my work on the back. This error did not come to light until a friend called to say he’s just seen the show, which had been open for more than a month. He described the piece. It didn’t sound like mine at all. What made him think it was mine? “Well, because your signature is clearly visible”. The museum corrected the error after I brought it to their attention, one week before the show ended. The art critic who now owns the piece just smiled when I asked her which side she displays. Her reply was, “Which do you think”? I think both sides are now worth looking at, not unlike your “Erased de Kooning Drawing”. When I make paper the prior life of the rags I use as raw material are a serious consideration. Each piece of paper I form is a reincarnation of the fibers and an reconstructed embodiment of the possible memory retained within the fibers. I use my own clothing, my wife’s, my daughter’s, and seek out other material that hold positive associations. I am constantly searching for the invisible and untold stories woven into the cotton and linen that I turn into paper. The positive associations that they bring to the paper then carry over into the artwork created upon it. Whenever I make paper I also repulp older, less successful artworks, so they may be reincarnated into new and potentially more evolved artworks.

For more than a decade I worked as a museum art handler. During that time I packed, crated, hung, framed, matted, lugged, carried, and otherwise touched a hundred or more Rauschenbergs. But the “Erased de Kooning Drawing” was never one of them. Perhaps at one time the atoms from your pieces passed into my fingertips, through the cotton gloves I wore. In any case, I have no atoms to show for it. If I had only thought to make pulp from those gloves. But that was long before the idea dawned on me, after having been nose to nose with the erased legend, you had so long ago asked Bill de Kooning for.

Likewise, I would like to ask you for something, not to erase or burn or otherwise undo, but which I could turn into pulp and combine with my own pulp. As much as I would like to ask you for some piece of artwork which you might find hard to part with, I would be content with a worn out t-shirt that you would otherwise have discarded. Naturally, I would turn my nose up at a ripped up print or drawing, or an entire edition of prints you haven’t touched in years. From this mix of pulp I will remake new sheets of paper and a fresh beginning that simultaneously is both an older Rauschenberg (article of clothing or torn up work on paper, etc) and a newer piece of mine. The size of the paper would be the same dimensions as the “Erased de Kooning Drawing”. I will split the fresh, Repulped Rauschenberg paper with you, if you wish. All remaining paper will be printed or painted upon, depending upon what the finished sheets suggest.

I intend to offer to donate the completed pieces to SFMOMA and other museums to be added to their collections, archives, or sold by these museums to raise funds. The pieces will each be entitled “Repulped Rauschenberg”.

I hope you will consider sending something I could convert into pulp so the Rauschenberg Repulp Project might take physical form.

I thank you for your time.

If you are too busy to accept my proposal or unable to respond to my request, I have prepared the following default reply from you:

I am unable to comply with your wishes of an old print for you to churn into new paper. Instead I have enclosed the accompanying manilla envelope containing erasures, sealed these past fifty-four years. 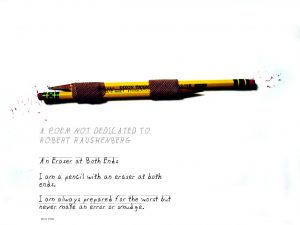