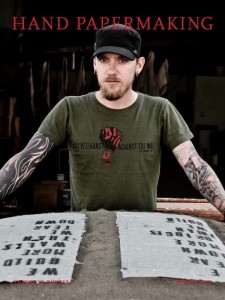 In a panel discussion at the World Print Council in 1978, Kenneth Noland remarked, “Making handmade paper allows a tactile relationship between the artist and the paper. [It] allows the artist to get under it, rather than assume that you have to accept the surface and put something on it.”[i]

That’s putting it mildly. Paper holds the possibility to be much more than what it appears to be. The fibers we choose to pulp have their own histories. As such, the meaning within the material can allow the artist to not only “get under it,” but to identify with the filaments. The act of making paper deepens when there is a profound connection with the article that is turned into pulp. The beautiful sheet of paper that results from such a process is perhaps less significant than the cathartic event leading up to the end product.

Three men came barefoot into my studio, The Colorado Centre for HANDMADE Paper, and spent the day making life-affirming paper from burdensome memories. Other men followed shortly. This second group had come to participate in a transformation. The first three would lead them toward that point where paper and their lives would meet.

It was an unseasonably warm weekend. November does not usually start off in the upper seventies, at least not here in Colorado. The warmth encouraged the three artists running the Combat Paper workshop to drag vats, couching tables, screens, blankets, and the hydraulic press into the open air. Off came the shoes, too. Those few balmy days led to more than bare soles. Such is the case when combat veterans rip asunder their military attire, and churn karmic baggage into radiant paper.

What began as a collaboration between two artists, Drew Matott and Drew Cameron, has become both a viral and virtual phenomenon. Cameron is an Iraq War vet, Matott an activist artist. Both had papermaking experience. Cameron was taught Eastern techniques by his father, who had studied with Timothy Barrett, while Matott learned Western methods at Buffalo State University and Columbia College.

“Shortly after Matott arrived at Columbia College to begin his MFA studies,” recalls John Risseeuw, “there was a show in their gallery called ‘Politics on Paper—Global Tragedies/Personal Perils,’ with works in, on, and of paper by Eric Avery, Robbin Ami Silverberg, and my landmine prints. [Matott] says that the show revealed to him the obvious point that paper content could be powerful.”[ii] For the works in the show, John Risseeuw took clothing from landmine survivors, plant fibers from the locale where landmines had been “planted,” and currencies of nations responsible for the production of these buried explosive devices, and combined them as material and content of the paper for these prints.

Such a revelation found its expression after the two Drews started working together. Fate or coincidence led each of them to the Green Door Studio in Burlington, Vermont. The communal space at Green Door is a place teeming with activity and ideas, where interaction is unavoidable. When Green Door Studio hosted a Warrior Writers’ workshop, everything lined up—ideas, inspiration, equipment, knowledge, happenstance, and two key individuals—and Combat Paper was born.

It started as a visual artist’s response, a performance piece, at a writers’ workshop designed to help guide Iraq War veterans to express their feelings. Cameron read aloud what he had written while Jon Turner and Eli Wright snipped his combat fatigues off his body and converted the snippets into pulp. Afterwards, Cameron wanted to share the immediate elation he felt from this experience with other returning soldiers.

Since February,2008 Cameron and friends have been traveling across the country, offering workshop after workshop to Iraq War veterans. Matott notes, “Pretty much all the vets that the Combat Paper Project has worked with suffer from post-traumatic stress disorder and traumatic brain injuries—the work that they are creating is very much cathartic, but clearly is no replacement for more formalized therapy.”[iii] Former medic Eli Wright explains, “We have to focus on some negative and ugly things just to get past them and move toward peace and healing.”[iv] In his tour of duty in Iraq, Wright was not focused on killing, but saving. However being unable to save lives takes its toll as well. Having grown up in Denver, Wright returned to Colorado for the first time in years and participated in the Combat Paper Project, a restorative visit indeed.

At each event, whether in California, Colorado, or Massachusetts, this story is retold: “Today I witnessed a vet, new to the workshop experience, pull his first sheet of paper made from pulped combat fatigues,” reports Tom Lascell, a photographer and studio partner at Green Door Studio. “[The vet] grinned from ear to ear, and then started talking quickly about how he could use it. Ten minutes later he was binding his first book [a blank journal] made from sheets made at a workshop on Martha’s Vineyard [at Seastone Papers] earlier this summer. I think he may have found his artistic voice. I wonder what he’ll write this evening?”[v]

The work continues and evolves. It is an ever-expanding activity, assisting more returning veterans with each workshop. In turn, once the project leaders depart, a new mentor base is established, connecting papermakers with vets who can show still more vets how to transform traumatic memories. One barefoot vet, who splashed in the puddles on my studio floor and out through the big roll-up door to the sunshine outside, summed it up best: “I think that writing on any kind of paper is good,” stated Jon Turner, “but what it feels like to write on a piece of paper that used to be my combat uniform is CRAZY!”[vi]

Some freshly formed sheets of paper are destined for other uses than writing. They become surfaces for pulp painting. To facilitate newcomers who may have never painted before, let alone done any pulp painting, the workshop leaders prepare stencils for pulp painting. Images from Iraq or text, such as “WE BURN MORE BRIDGES THAN WE BUILD,” allow for an easy transition into a visual expression.

The emotional experience associated with the uniform may be positive or negative. It is not neutral. “I definitely have positive associations, memories, and relationships with what experiences I had in that uniform, as well as negative ones,” describes Drew Cameron. “Overwhelmingly the ones I carry are deceit and betrayal. So being able to take ownership over it…has been most empowering.”[vii]

The act of sacrificing a favored article of clothing, one with personal emotional value, indicates a high degree of commitment to the process. That emotional investment is further multiplied by the labor involved in forming the deconstructed garment into a sheet of paper. The tearing, pulping, forming, couching, pressing, and drying take days. Turning good associations into good paper seems like alchemy, like spinning straw into gold.

What happens in Combat Paper is an amazing twist on that same impossible science. In Combat Paper the clothing may recall darker visions. These images might be unshakable, haunting memories. They may trigger the need to block them with drugs, alcohol, or violence. In this case the deconstruction of the combat uniform acts to neutralize the power of the negative associations by obliterating its former shape and transforming it into a positive entity: paper.

It takes many torn-up uniforms just to scratch the surface of such nightmares. One can unbutton and slip out of a combat uniform. But something tells me that it is much more difficult to shed the weight of the uniform pressing down on a soldier’s spirit. Shaking off the camouflage is not something that can be outsourced to a bottle of pills. No one can exorcize such deeply embedded demons, but one must try.

Make a target, tear the signifier, destroy down to the tiniest fiber, build anew. Then pour your guts into it through the point of a pencil.

Beating combat camouflage into paper, from the point of view of the soldier who wore it in a conflict, takes the transformation to a different level.  It gives personal meaning to “beating swords into plowshares.” This is the realm of the truly invisible, the deeply internal, emotional side of existence. Call it spiritual, hocus-pocus, or what you want. Call it paper with a purpose.

Sometimes things matter. Sometimes life is just making it through the day, after all. For these veterans, that might have involved action resulting in fatalities among both comrades and strangers. These have left deep and damaging effects. The Combat Paper Project and the paper it has produced have been a means to confront and externalize these memories, to repair a bridge that leads home.

I don’t see it as product, but process.

Postscript: I should mention that there are now three vets who are regulars at The Colorado Centre for HANDMADE Paper. Two in particular act to facilitate newbies through the process of Combat Paper. They have bought pride to the project in producing something by their own efforts. Neither has a “regular” income-producing job, so they are at the mill making paper everyday. They are like sponges for knowledge and craft.

I have a rule at my mill that you must wear a cowboy hat while making paper. The hat takes your head to a different place. When two vets make paper, each sees that the other is not a soldier. They are cowpokes playing in the pulp.

This article was published in the magazine HAND PAPERMAKING, SUMMER 2009, Volume 24, Number 1