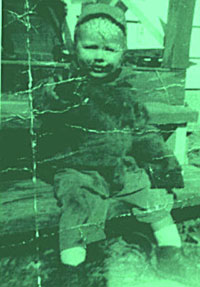 That little green boy was barely three. He still needed a cap to keep his head warm on a cool May morning, in 1950. His hair was so blond and short under the cap. It almost was no hair at all.

He’d seen grown ups apply paint before. It looked like fun. Maybe it looked like a grown up thing he could do, too. All it took was an open gallon can, a paint brush, and a surface begging to be painted. His thoughtful father must have needed his help, otherwise why would he have opened the can and gone away? He was a natural, and paint flowed easily. Unlike other boys his age and older, who might use paint to make an image of a dog or sun or mom or dad, this green elf painted to paint. Here was an action not a depiction. A three years old in the flow. A three year old can easily get into the flow.

Later on, when the paint can was emptied, he was captured by adults and stripped of his otherworldly tools and powers, at least for the time being. Either Mom or Grandma Rose must have said, “Show me your hand.”; as she snapped the picture.

I remember the good sound of laughter, and no angry yelling. Mom or Grandma must have told dad to shut up since it was his fault anyway. I can also smell the gasoline soaked rag and feel it being rubbed, sometimes a bit hard, on my face and hands. Dad started to do the rubbing, but Grandma took over. I can see her big, almost puffy fingers. Her fingers turned green as my greenness dissolved. The smell of the gasoline was powerful. The scent of the paint was even greater.
Some flowers bloom right away, and others are meant to blossom later. Each thing has its own time. While the little forest green boy was kept clear of buckets of paints, he was still a little forest green boy. The gasoline took
off only the top layer. The paint sank in deeper.

That  little forest green boy comes with me into my own studio. He’s there with me every day, or so I hope,
popping from a can, squeezing himself out of a tube, and wearing a skin of paint, even if it’s acrylic and not oil based.