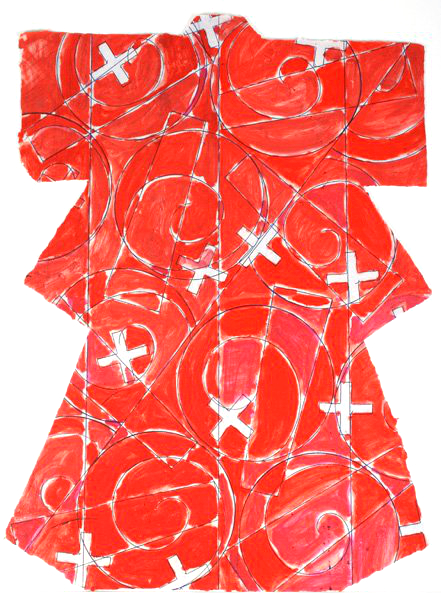 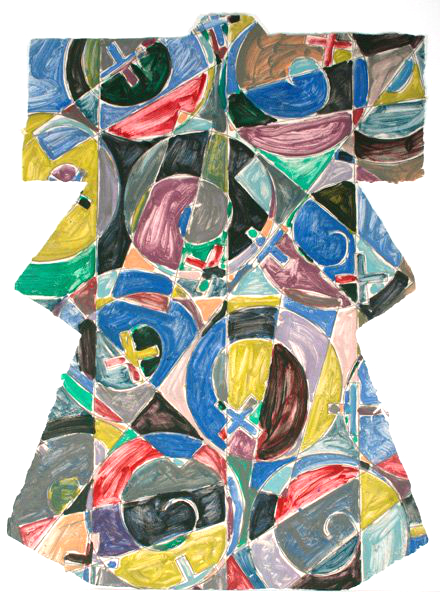 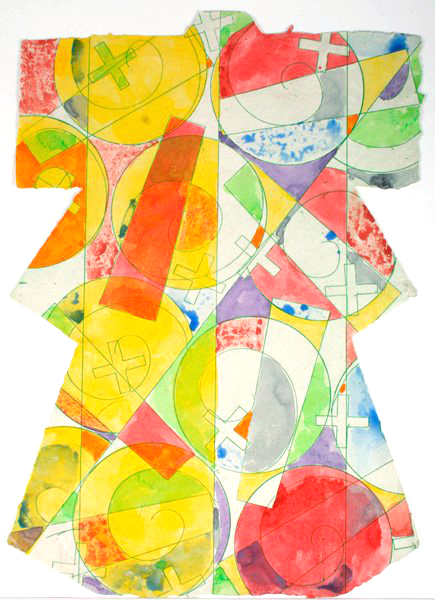 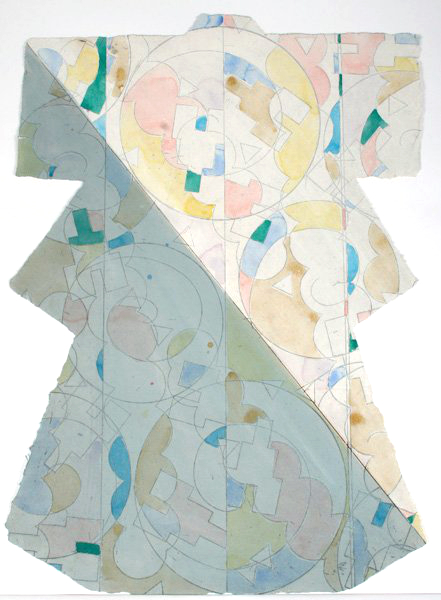 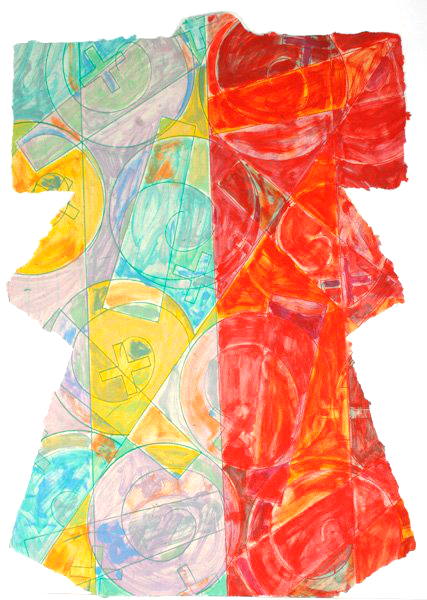 What is it about these kimonos?

The word that comes to mind most persistently is “joyful”.
There is such delight in them, such pleasure taken in the way
a thing can sneak away from its apparent purpose – in this
case as an article of clothing – and become something else
entirely. These kimonos work the way that poems sometimes
do, moving from their apparent subject to something deeper,
something more unsuspected, more challenging.

They are miracles of a kind, playing fields which allow the artist
to create as many separate universes as there are kimonos.
Maybe they are not kimonos at all, but flying carpets,
modes of “consciousness transport.”

Time and again I lose myself in them: and in that sense,
they become wearable after all. Not as articles of clothing,
but as objects of desire. What a pleasure to live in a world
so often difficult and challenging beyond our comprehension,
but one in which such kimonos also exist! 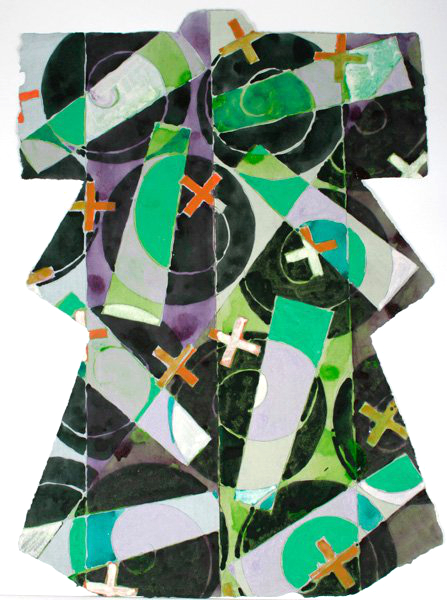 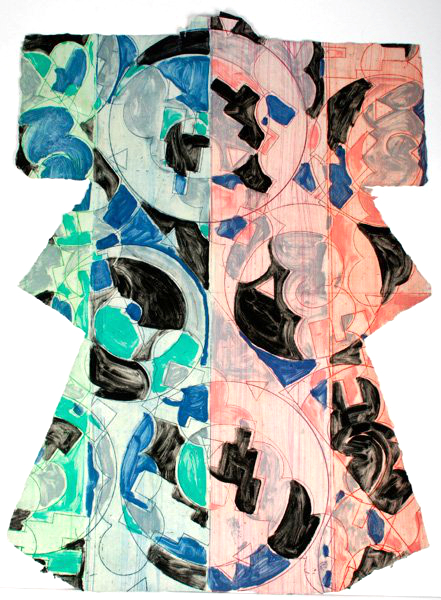 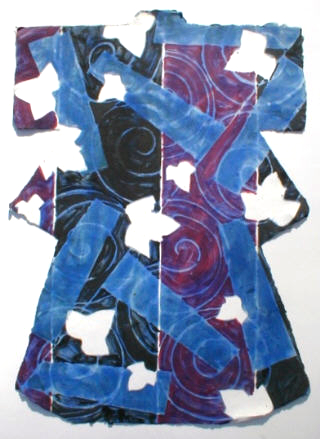 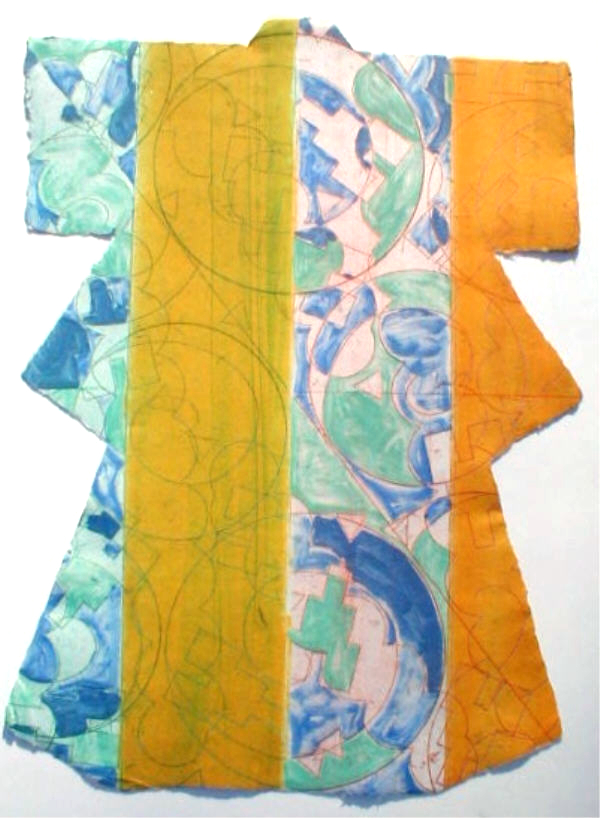 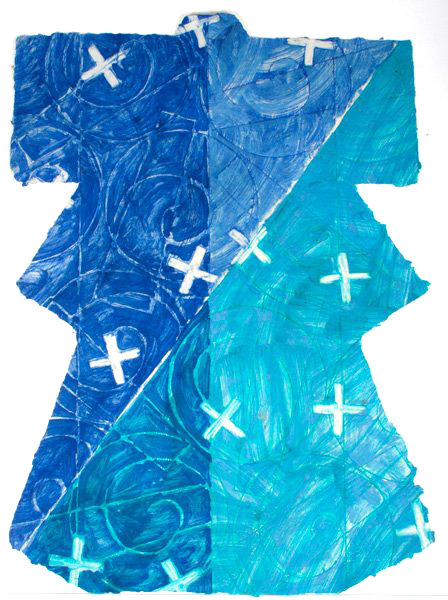 The original intent, in selecting the kimono shape, was to use a non -Western shaped motif as a format for my prints. I had already employed fan shapes. Kimonos seemed like a very logical step. The first series, “A Non-Geometric Kimono”, used a famous, well known Noh costume as a format. The image was overt and I made one hundred variations. Each kimono was assembled from four pieces of handmade paper, sewn together by a studio assistant. The primary goal was to create a series of prints where the ink, paper, and stenciled color changed and the image and format were constant. While each piece could stand on its own, the entire series was to be considered in terms of process. (Preview the book, Kimonos of Paper). 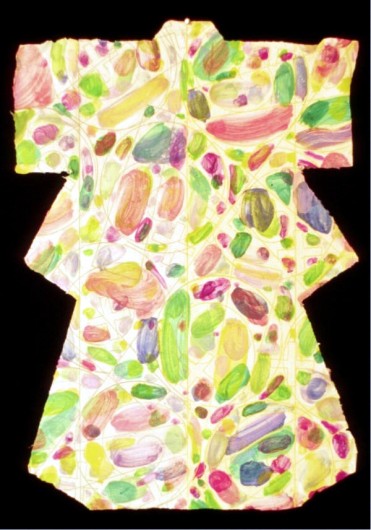 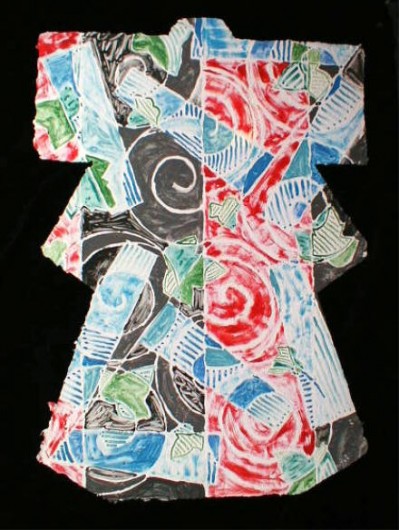 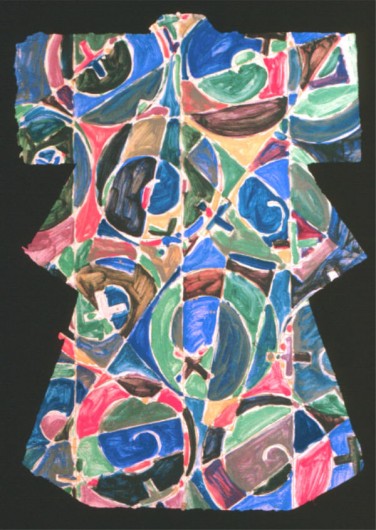 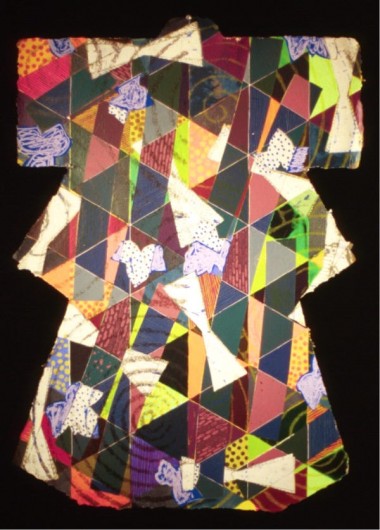 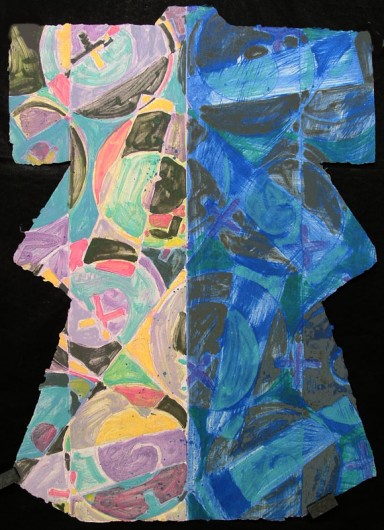 More than 400 Kimono shaped pieces exist, a number in museum collections, such as the Metropolitan Museum, Portland Art Museum, New Britain Museum of American Art, and others. The Purdue University Engineering School hangs several in their building to demonstrate the connection between creation and skill. 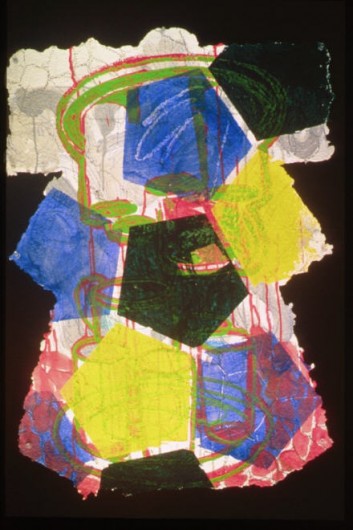 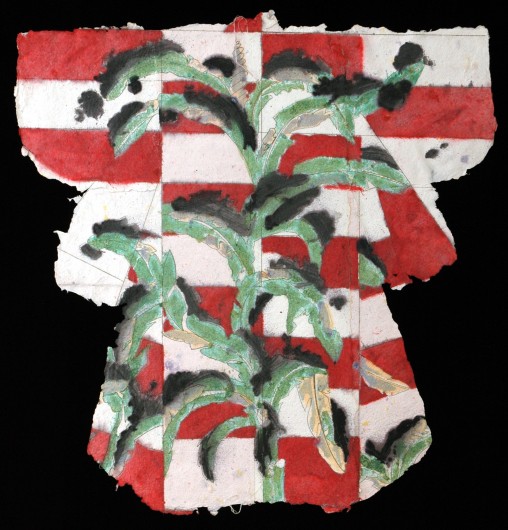 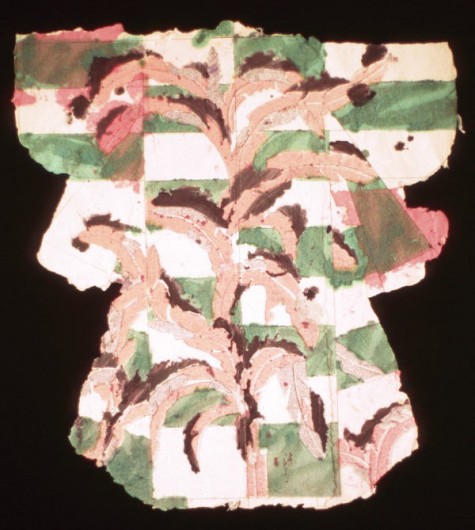 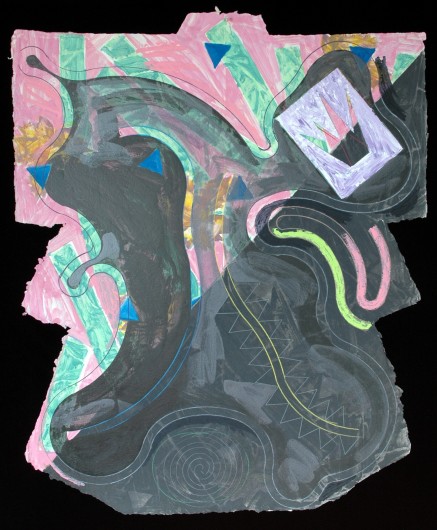 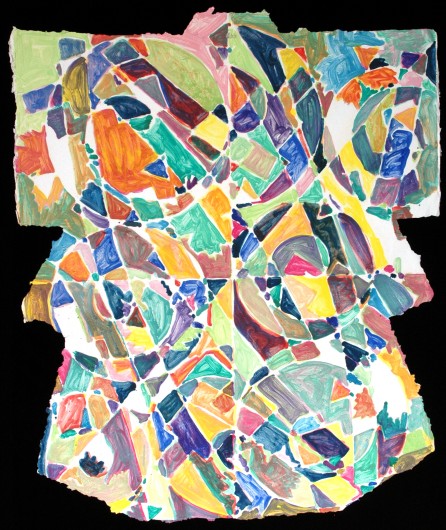 My first kimonos were a series of one hundred variations on a simple motif. I had appropriated a very famous and recognizable Japanese Noh costume and reduced it to its graphic essentials. I reduced the scale and made a linear engraving on two abutted zinc plates. I made four hundred sheets of paper in two basic forms, the right and left body/verticals and right and left extended arms/horizontals. These papers were various colors. Each kimono form was assembled by weaving four sheets together and giving them to an assistant to join on a commercial sewing machine. After assembly, the forms were imprinted using uniquely inked plates. Finally the already varied pieces were handcolored using four pouchoir stencils. The results were a series of one hundred, related, but unique pieces. 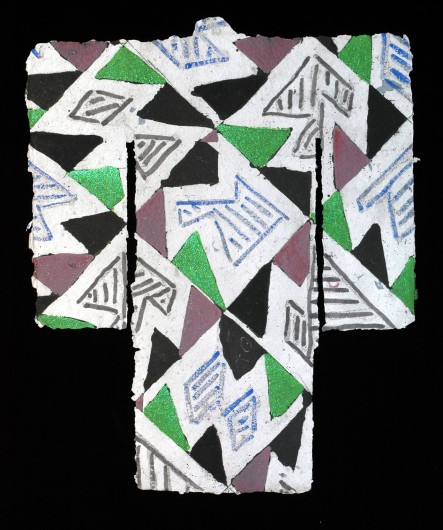 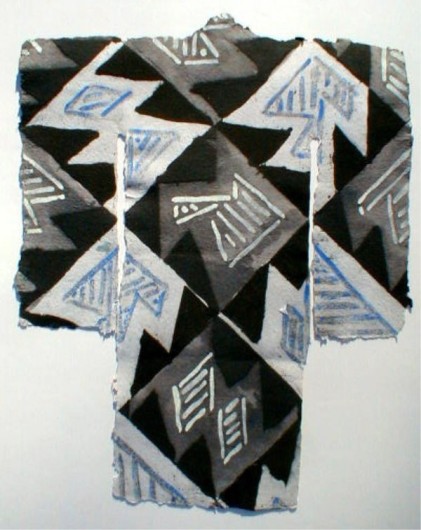 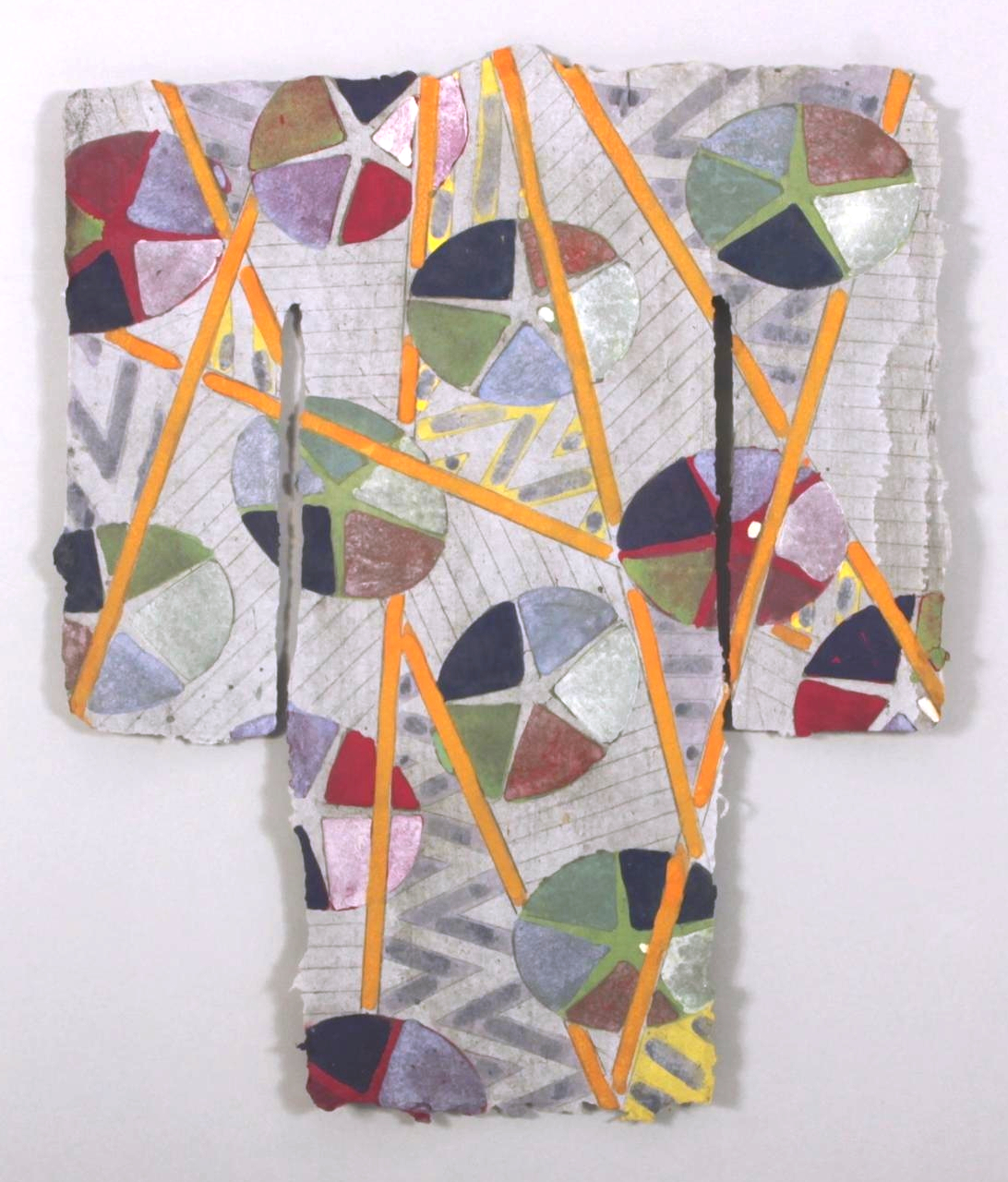 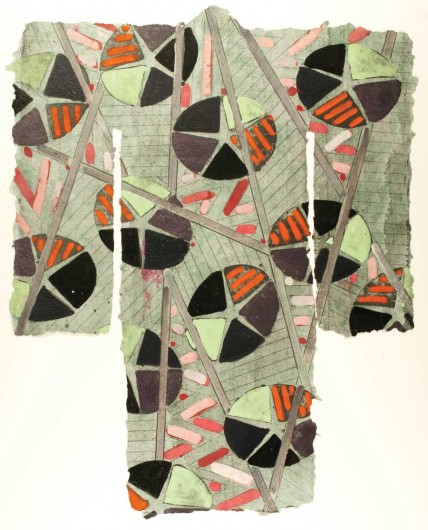 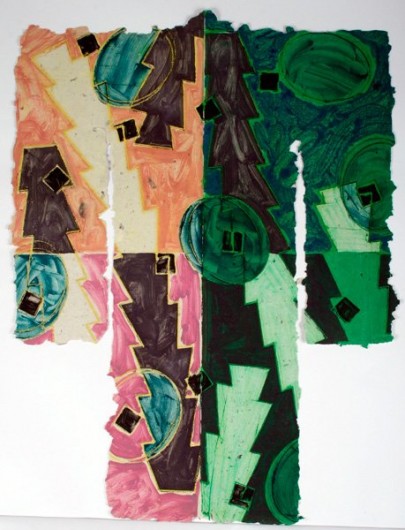 Shortly after my first showing of the kimono forms, kimonos and kimono inspired artworks seemed to be everywhere. One day my New York dealer called to ask if Miriam Shapiro could have permission to borrow a few of my pieces to take to her studio. While I was flattered, this phone call combined with the proliferation of kimono imagery was enough to make me back off the kimono bandwagon. Kimonos, for me were not about the human form or about designing fabrics or clothing. They were, until that point in time, an untapped shape worthy of use. 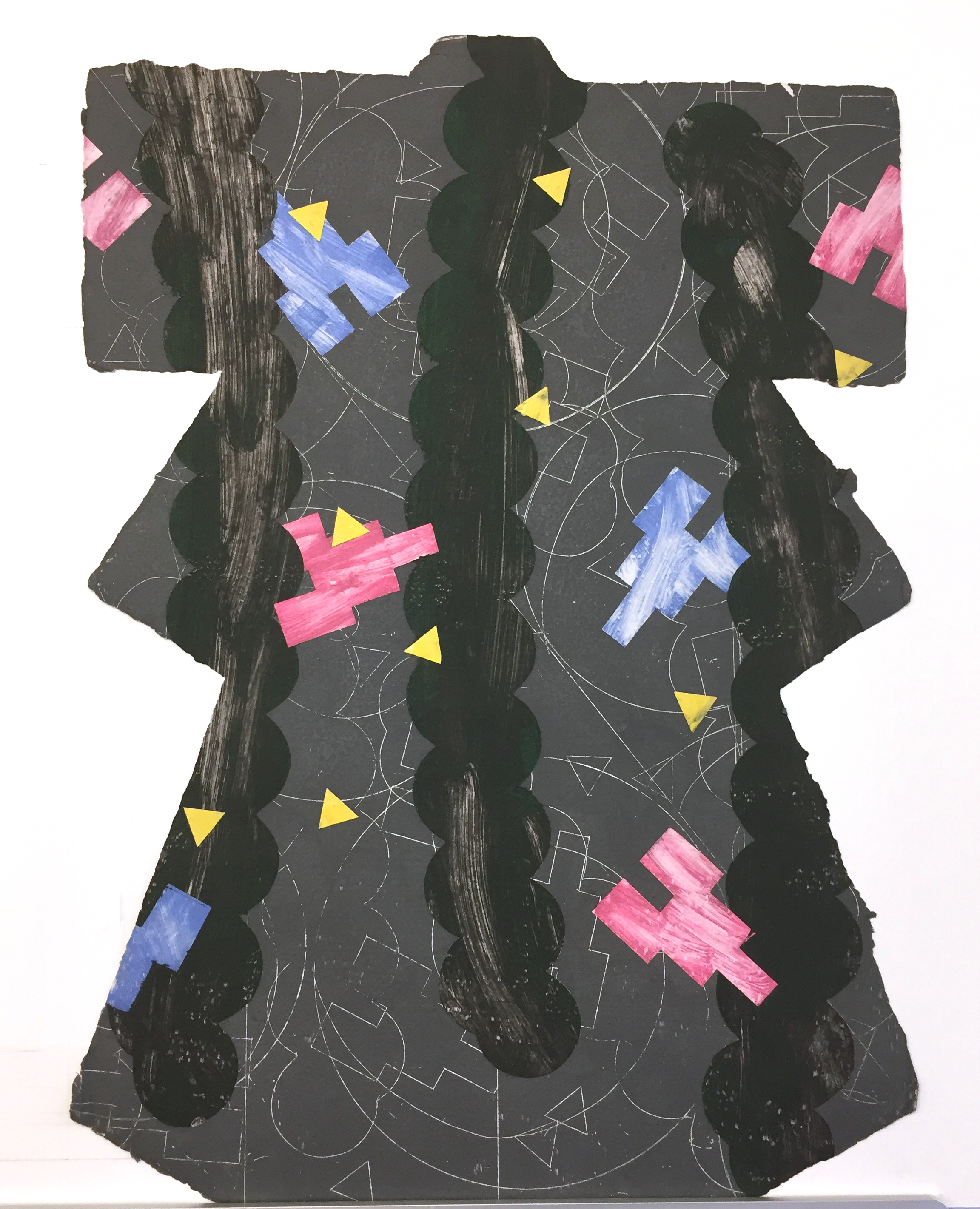 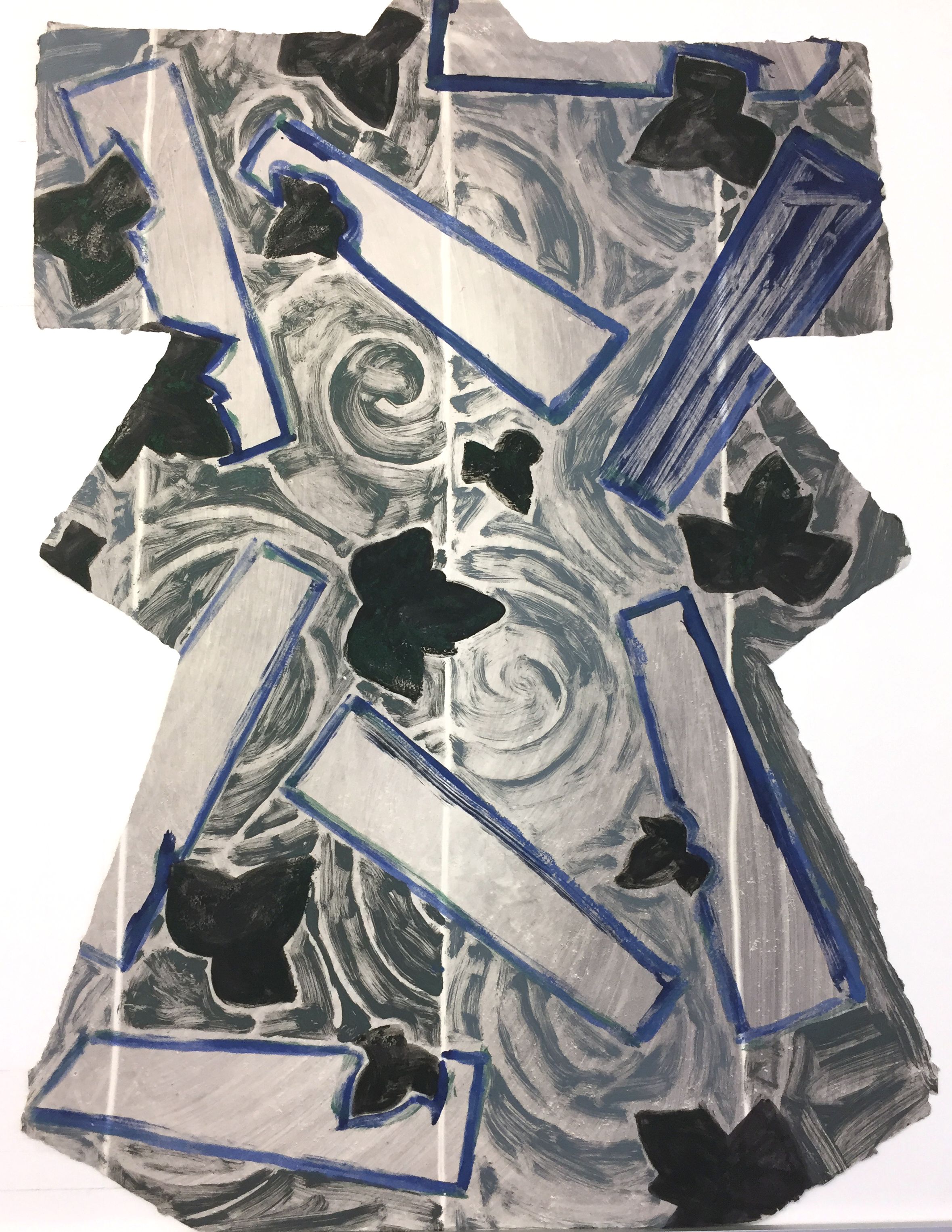 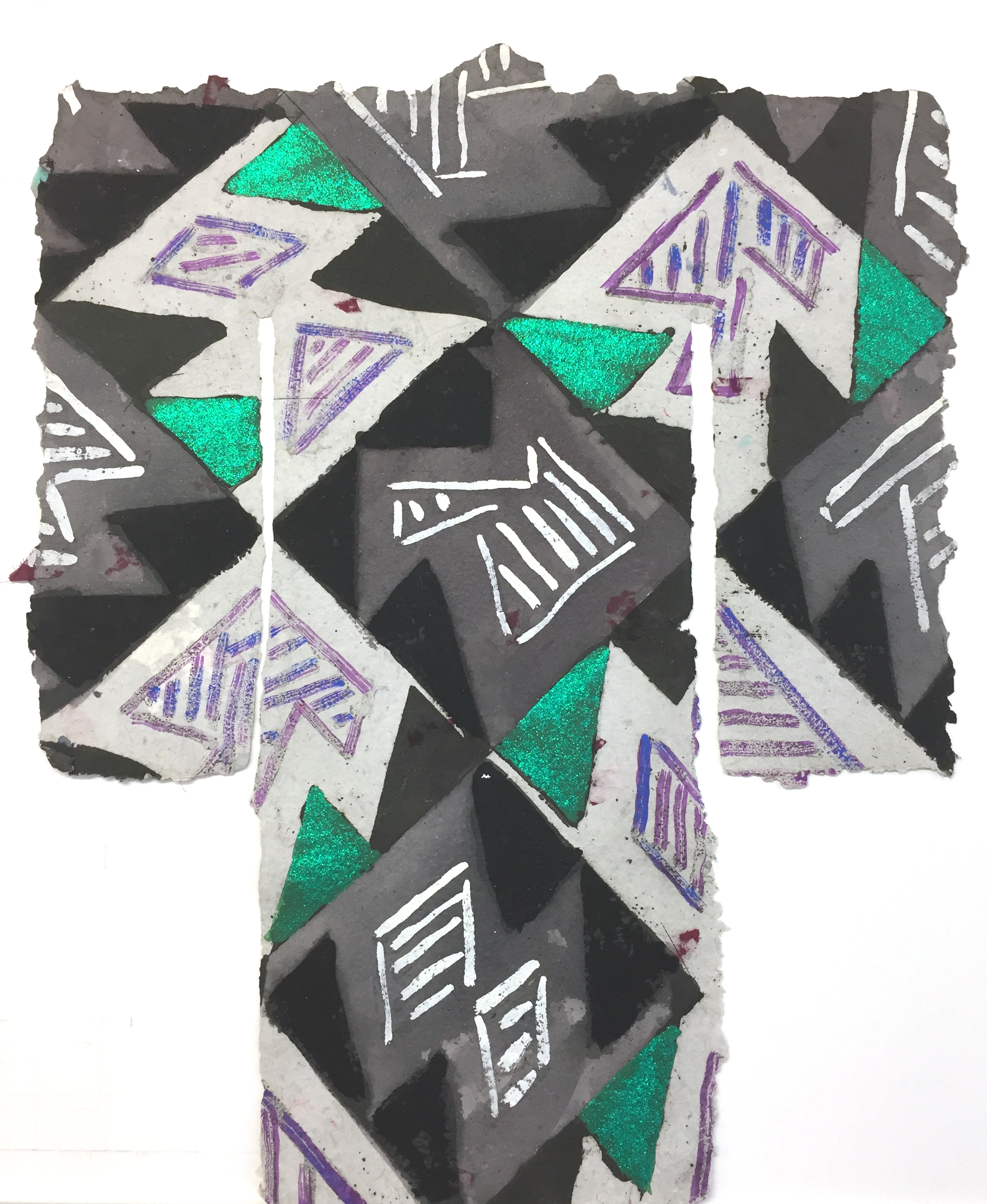 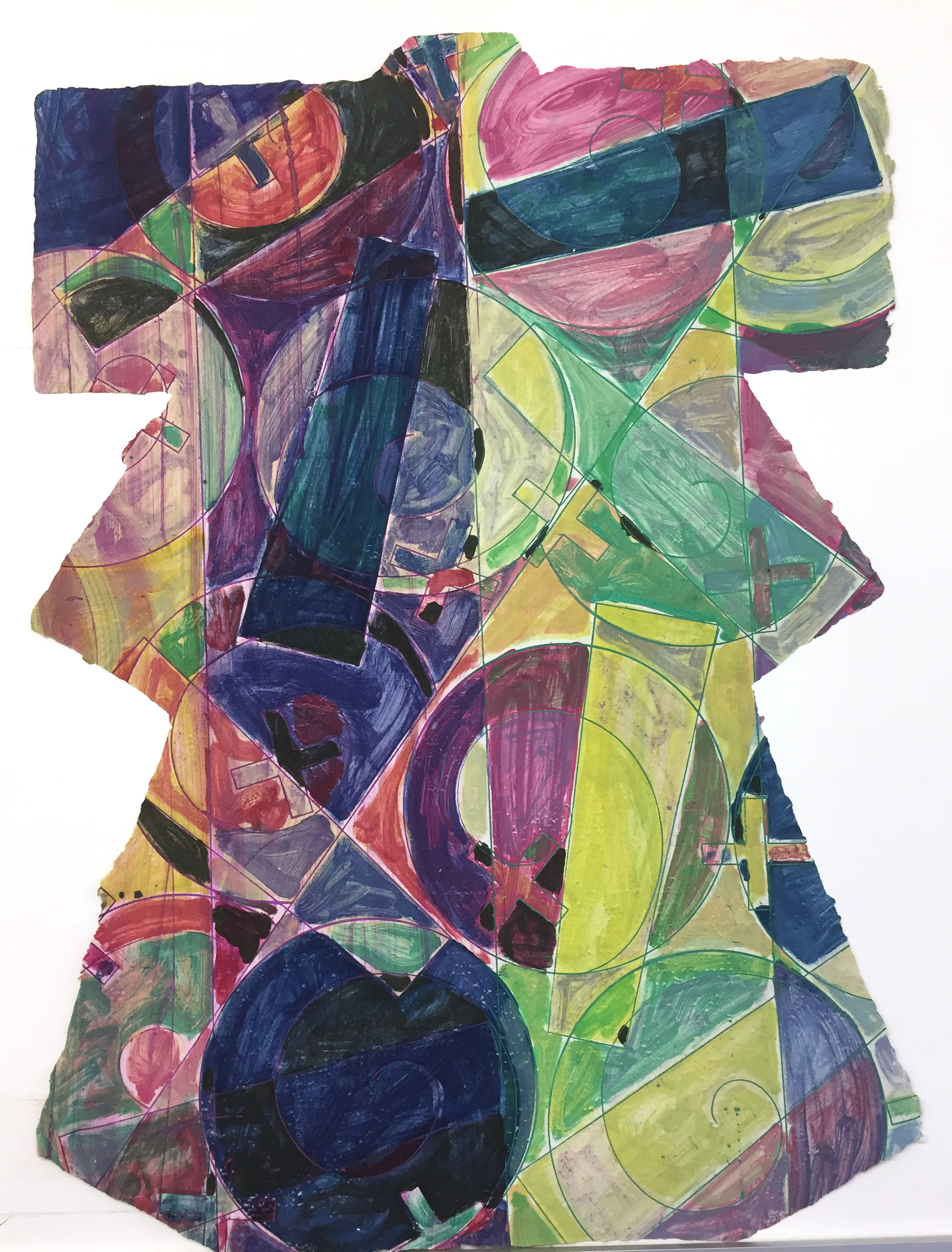 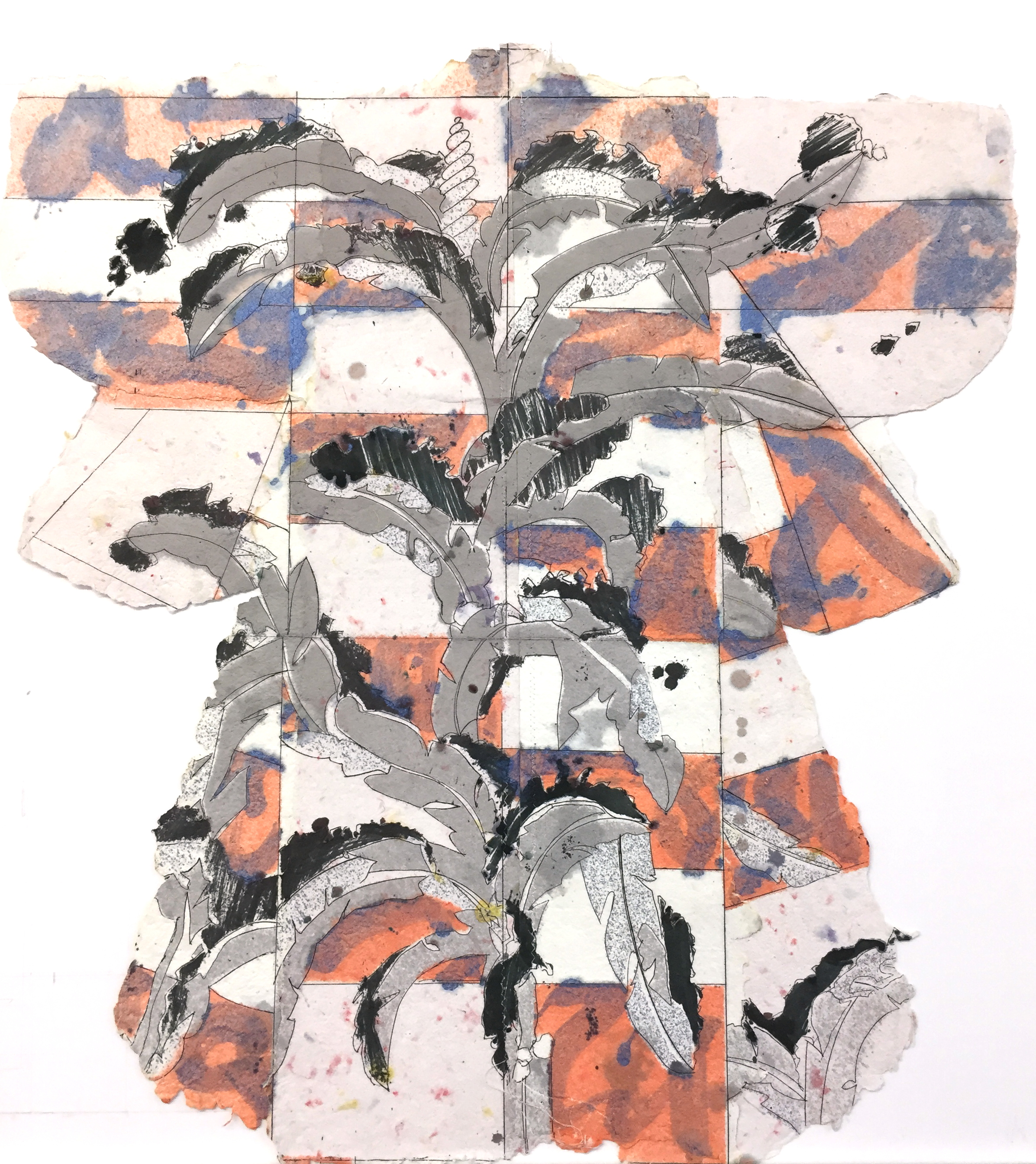 I invite you to read the piece: The Mummy’s Curse and the Armani Suit. It will answer the question of why I make my paper from fibers of known origins.